The largest object ever assembled in Earth orbit, a 450-ton unique science laboratory. The Bridge for
Mankind to step further into Space Exploration. 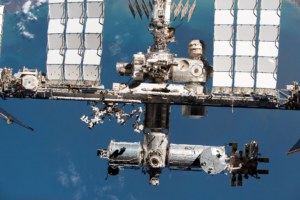 This Ustream channel was originally used to show the views from the “High Definition Earth Viewing” experiment (HDEV). That was an experiment to see how well, and how long, standard consumer-grade video cameras could last in space. The experiment consisted of four different brands of home-use cameras: Panasonic, SONY, Toshiba, and Hitachi models were used. The cameras were aimed at the Earth, and they were powered up and down sequentially. The experiment was designed to last about a year, but in fact ran for over three years before a computer problem ended their transmission in mid-2019. (Three of the four cameras were still functioning quite well!)

Rather than have a channel with nothing to show, NASA now uses that Ustream channel to show Earth views from one of the external High Definition cameras mounted on the ISS. While the HDEV cameras were fixed-focus and fixed-aim, this external camera can be rotated and re-aimed as needed or desired. It also is sensitive enough to low light levels that we can often see city lights on the night side of Earth.

So, what does this camera show? It shows an area off to the left (to port) of the direction of travel of the ISS. Think of sitting in the back seat of a car, and looking out through the left-side front window rather than out the windshield or windscreen. As the ISS approaches distant objects, they appear to move off to the left (port) side in a curving arc. Last, the camera itself is rotated 90 degrees, so that to look more-or-less forward, you have to turn your head sideways to the left. 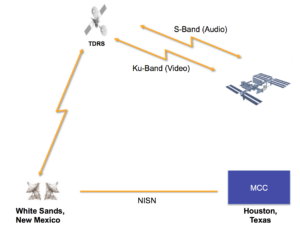 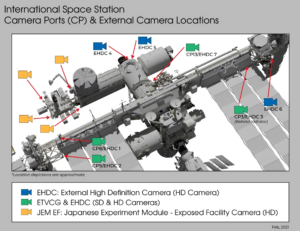 Development of the South Atlantic Anomaly // based on data collected by the Swarm Satellite Constellation from 2014-2020. Credit ESA:

This is an Operational Stream for Communication and Supervising ISS.

Dark Screen: The ISS cameras are pointing at the night side of Earth.

Blue Screen/SD or Red Screen/HD: LOS = Loss Of Signal, ISS is in a spot without an available video relay satellite.

Images from the Cameras: You’re seeing images from the external ISS cameras, or, during the crew’s working hours, from inside the ISS! There are about 80 cameras, external, internal, on robots, on experiments (for real-time transmissions).

What is Telemetry? Telemetry is the automated communication processes from multiple data sources, collecting information in the form of measurements and relayed using radio,
infrared, ultrasonic, GSM, satellite or cable, depending on the
application, for remote monitoring and analysis of equipments, spacecrafts, Rockets etc.

This one displays ISS telemetry, but I would say, more for the ones specialized, w/ knowledge how to use/read/interprete it >>>    https://iss-mimic.github.io/Mimic/dashboard.html

This one below is simple, easier, less data >>>    http://www.telemetry.space/

The isslive had the best telemetry depiction in the past, not been updated lately (keeping an eye, hoping they fix it). >>>

Some info about how to do etc : https://github.com/Lightstreamer/Lightstreamer-example-ISSLive-client-javascript

NASA has taken many Telemetry sites down, in protection and safety of ISS.

To orbit a planet essentially means to be above the planet and to be moving forward at about the same rate you’re falling towards the Earth. This creates the phenomenon of constantly falling towards the Earth, but never hitting it. (Sir Isaac Newton’s 3rd Law of Motion, cannonball)
Here is a rough explanation for understanding the ISS orbital inclination.
The inclination of ISS Orbit is 51.6°, by agreement between NASA and Roscosmos.
NASA vehicles are launched from Cape Canaveral in Florida into orbits with an inclination of ~28°. (This is the latitude of Cape Canaveral.)  This requires a greater course correction later, burning more fuel, but in case of a launch fail, the vehicle will fall over the ocean.
Russian vehicles typically launch into orbits with an inclination of 51.6°, even though Baikonur is at 46°N. This is also in case of a launch failure, avoiding a vehicle re-entry over China. 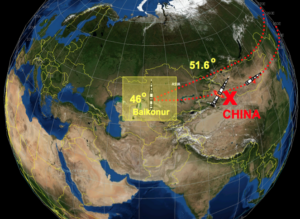 During a single ISS orbit, which takes roughly 92 minutes, Earth rotates Eastward by 22.9°. This means that ISS passes over different locations, moving 22.9° west of its last pass, measured at the position where the orbit crosses the equator. The track repeats about every three days. The exact ISS altitude affects the length of time each orbit takes, and that will determine how closely the tracks will repeat. (Watch animation below.)

Since it is constantly in free-fall, there is virtually no gravity in the ISS.  But it it not completely gravity-free; we call this “micro gravity”. Astro- and Cosmonauts feel weightless, because they’re falling at the same rate and direction as the rest of the Station.
Two to four times per year the ISS enters a “full sun” period when its orbit aligns closely with the Earth’s Terminator. (No, not Arnold; the line that divides daylight from night-time.) Because of its altitude, ISS can “see” over the polar regions, and is virtually never in the Earth’s shadow. This is called a “High-Beta” orbit, and Flight Controllers  in the MCC (Mission Control Center, in Houston, Texas) have to make small adjustments to the Station’s attitude to avoid having the Station overheat.
Below is a list of just a few of the many Tracker apps available that can tell you where the ISS is located. Many of them will also let you know when ISS may be visible from your location. Please note that all Trackers here use a “Two-Line Element” set (TLE) to predict the Station’s location. They are not in real-time, so if the ISS undergoes an altitude boost, which results in a longer orbital time, the trackers may be slightly off until the code is re-set.
ISS Latest Status & Docking Ports 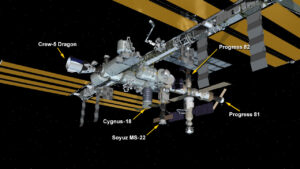 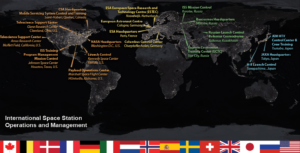 Quick Facts about the International Space Station:
The ISS is made up of a number of modules and elements. There are living quarters, storage areas, science laboratories, batteries, and solar energy collectors, in addition to a hundred smaller things, such as antennas and experiment platforms.
If it could be brought back to Earth in one piece, a soccer field would be needed to park it in. Most of its size is due to the huge area the solar panels cover. They cover over 4,000 square meters (about one acre), and generate up to 90 kilowatts of power.
Inside, the individual modules may not seem all that big, but not needing floors or ceilings, they have room for extra gear of all sorts. Altogether, they give the residents as much total room as a six bedroom house!
The internal air pressure is set at about the same level as in a commercial airliner such as a Boeing 747.
The ISS is truly an international undertaking. The main modules are from the US (NASA), Russia (Roscosmos), Europe (ESA)  and Japan (JAXA) ; the famous CanadArm 2 and the robotic DEXTRE are both from Canada. The “residents” are mostly Russian and  American, but they have been joined by ‘Nauts (Astronauts, Cosmonauts, and any other kind of ‘nauts) from Canada, Saudi Arabia, Japan, Germany, Italy, the UK, and about a dozen other countries. It has been continually occupied since November of 2000.
The ISS orbits the Earth at an altitude of about 405 km (255 miles), though that varies a bit. Its orbit is not quite circular, so at some points it is a little lower, and at other points it is a bit higher, but those variations are fairly minor.
At that altitude, ISS orbits the Earth in roughly 92 minutes, so the people on board get to see about 16 sunrises and 16 sunsets for every one of ours!
In order to maintain that orbit, the ISS is traveling at about 27,420 km/hr (17,135 mph), covering 7.6 km (4.7 miles) every second.
Outside ISS, Space is not quite truly empty, though it is very close to what we would consider a vacuum. There are still a few molecules from our atmosphere out there, and given enough time, the ISS does slow down a very small amount, and loses a little altitude (about 5.5 meters per day). So, a few times each year, ISS uses one of the Progress capsules docked there to boost the station back to a higher orbit.
When necessary, Progress is also used to change the trajectory in what is called a “DAM” (Debris Avoidance Maneuver). Another way to boost ISS is by using on-board thrusters.  Cygnus supply spacecraft can execute reboost operations as well if needed. This was successfully tested in July 2018.  An ATV  (Automated Transfer Vehicle) has also been used to boost the ISS in the past.
There are at least 50 onboard computers running things on the Station. Between them, they run about 2,300,000 lines of computer code!